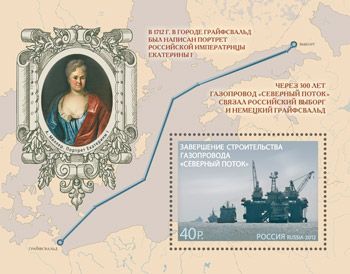 Nord Stream ( North Transgas and North European Gas Pipeline) is an offshore natural gas pipeline from Vyborg in Russia to Greifswald in Germany. It is owned and operated by Nord Stream AG. The name occasionally has a wider meaning, including the feeding onshore pipeline in Russia, and further connections in Western Europe.
The project, which was promoted by the government of Russia and agreed to by the government of Germany, was seen as controversial for various reasons, including increasing European energy dependence on Russia and potential environmental damage.
The project includes two parallel lines. The first line of the pipeline was laid by May 2011 and was inaugurated on 8 November 2011.The second line was laid in 2011–2012 and will be inaugurated in October 2012, after which the line will be delivering gas at full throughput.
Circulation is 85 000 bl

First Day cancellation will be held at the post office in Moskow and St. Petersburg.