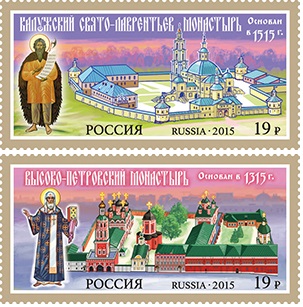 Vysokopetrovsky Stavropegic Monastery is located in Moscow, on Petrovka Street. It was founded by Saint Peter, first Metropolitan of Moscow and all Russia. Years of construction: 1315-1317. In Soviet period the monastery was closed by the decision of the Moscow City Council (in 1926). On 1991 the monastery was restored and became to function again.

Kaluga’s Svyato-Lavrentiev Monastery was founded in 1515 when Kaluga was an independent region. It is the oldest monastery in the city of Kaluga. The monastery is dedicated to the Holy and Righteous Lavrenty of Kaluga, who was sheltered in Duke Simeon’s home. 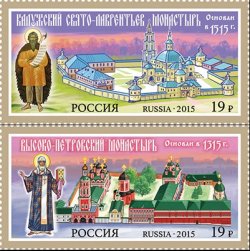 Russia. Monasteries of Russian Orthodox Church. 2 strips of stamp with coupon in each 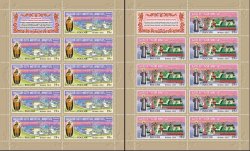 Russia. Monasteries of Russian Orthodox Church. Set of 2 sheetlets of 9 stamps and coupon in each