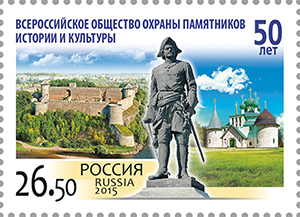 On October 14, 2015 Post of Russia will issue a stamp dedicated to the 50th anniversary of the All-Russian Society for Preservation of Historical and Cultural Monuments (VOOPIK). The stamp illustrates a collage of monuments restored with the support of VOOPIK: Ivangorod Fortress; monument of Peter I, by sculptor M. Antokolsky; The Holy Trinity St. Sergius Lavra’s metochion "Kulikovo Field". 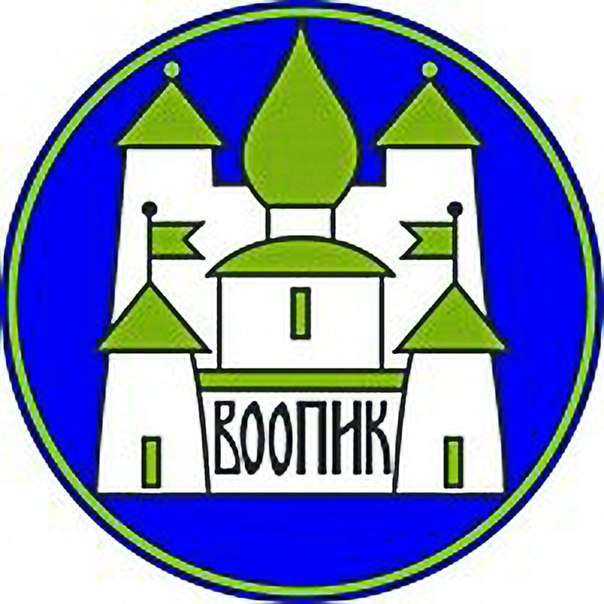 All-Russian Society for Preservation of Historical and Cultural Monuments (VOOPIK) was created by the decision of the Council of Ministers of the RSFSR on July 23, 1965 in order to attract the public to actively participate in the protection of historical and cultural monuments. The Sociatey is directly involved in the creation of conservation areas.
Special attention is also paid to the restoration of churches, chapels and monasteries of the Russian Orthodox Church and buildings of other religions. Nowadays, VOOPIK is a voluntary self-governing public institution with complete financial independence, which operates in most parts of Russia. Members of the Society are both organizations and individuals. 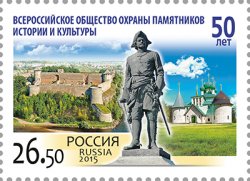 Russia. 50th anniversary of the All-Russian Society for Preservation of Historical and Cultural Monuments (VOOPIK). Stamp 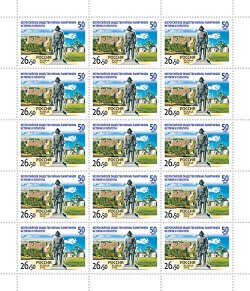 Russia. 50th anniversary of the All-Russian Society for Preservation of Historical and Cultural Monuments (VOOPIK). Sheetlet of 15 stamps