On November 11th, 2015 Post of Russia together with Post of Laos will issue two stamps in a joint issue, which are dedicated to the 55th anniversary of establishment of diplomatic relations between the countries. The stamps illustrate Church of the Intercession on the Nerl River and Pha That Luang Temple.

Diplomatic relations between the USSR and the Kingdom of Laos were established on October 7, 1960. Later, in 1994, the Declaration on the Principles of Relations and Cooperation between two countries was signed. Currently, there is a tendency of the development of Russian-Laotian relations in the fields of culture and education; trade-economic and scientific-technical cooperations are developing as well.

The Church of the Intercession of the Holy Virgin on the Nerl River is one of the masterpieces of the world architecture, built in 1165 by the Holy Prince Andrei Bogolyubsky. It is quite a short temple with one dome, decorated with carvings. Since 1992, it is included in UNESCO World Heritage List as part of the object "The White Monuments of Vladimir and Suzdal". This year the church celebrates its 850th anniversary.

Pha That Luang Temple is a Buddhist religious building, an outstanding architectural monument and a national symbol of Laos. It is located near Vientiane, the capital of Laos. The construction of the temple began in 1566 by the order of King Setthatirata. 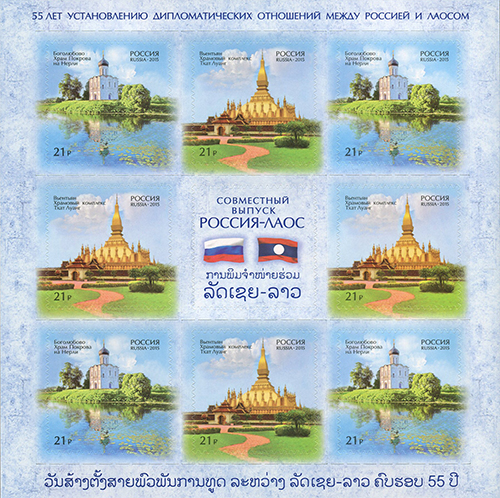 First Day Cover was in Moscow on 11th of November 2015 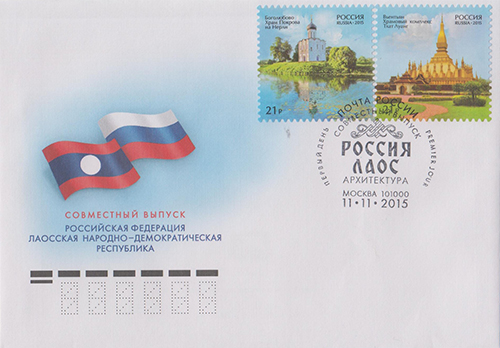 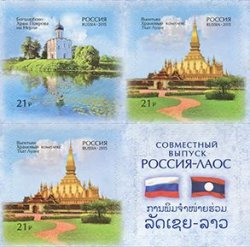 Russia. 55th anniversary of establishment of diplomatic relations between the countries. Russia, Laos. Architecture. Strip of 3 stamps with coupon 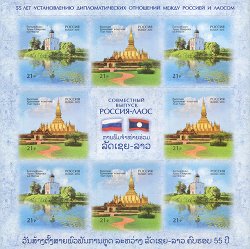 Russia. 55th anniversary of establishment of diplomatic relations between the countries. Russia, Laos. Architecture. Sheetlet of 8 stamps with coupon