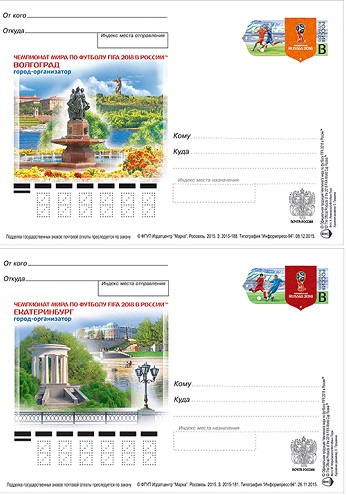 On December 16, 2015 two postcards with imprinted stamps were issued into circulation. The cards are dedicated to the cities of Volgograd and Ekaterinburg, which will host the matches of the World Cup 2018. The postcards with imprinted stamps illustrate the official emblem of the World Cup 2018, moments of a football match and sights of the host cities.

Volgograd is the largest city in the eastern part of the Volga region. It stretches along the banks of Volga River almost for 60 kilometers. In the middle of the XX century a canal linking Don and Volga rivers was created there, hence the city is called "a port of five seas".

Ekaterinburg is the fourth most populated city in Russia, after Moscow, St. Petersburg and Novosibirsk. The city stands on the border between Europe and Asia. Ekaterinburg positions first in the ranking of the most promising cities-millionaires of Russia and tops the list of "most attractive Russian cities for business".