Russia. 150 years since the birth of Pyotr Stolypin 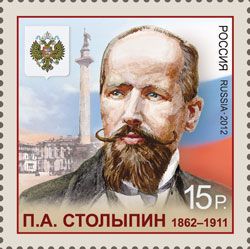 Pyotr Arkadyevich Stolypin  served as the leader of the third Duma, from 1906 to 1911. His tenure was marked by efforts to counter revolutionary groups and by the implementation of noteworthy agrarian reforms. Stolypin's reforms aimed to stem peasant unrest by creating a class of market-oriented smallholding landowners. He is considered one of the last major statesmen of Imperial Russia with clearly defined public policies and the determination to undertake major reforms.